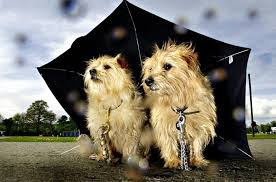 One Saturday afternoon while everybody was having a nap, I was at my balcony sitting down while my legs were up against the wall and my hand was holding a pen and a notebook. And this is the story I wrote:

“Liza! Don’t forget to bring my dog Sally outside this afternoon,” said Liza’s employer. “She needs some fresh air and she needs to mingle with some of the dogs here at the condo so she can get familiar with them. Remember you are not allowed to talk to anyone outside, especially with all the helpers in this condo.”

But by the time Liza finished her work and it was time to bring down the dog, she heard loud thunderstorms, followed by lightning, and the sky was very dark.

“Madam! Madam!” said Liza, looking for her employer. She found her in her room, sitting down while having her food.

“Madam, I think it is better to bring down Sally tomorrow instead as it might rain very soon”, said Liza.

“WHAT?” roared her employer. “Are you a weather reporter ah? You see black clouds it will rain ready ah? Lazy maid! Go and bring the dog for a walk outside!”

Liza couldn’t say anything after those insulting words and just followed what her employer asked her to do. Soon, a strong wind started howling, followed by heavy rain and thunderstorms. Sally got frightened and ran as fast as she could, enough to drag Liza’s small body.

Liza was dragged to the ground. It hurt her so much that she ended up with bloody knees and bruises on her face and arms.

“Oh my God, oh my God! Sally, please come over here. You are so wet, what happened to you sweetie? Oh my! Come here baby!” called her employer to the dog, not bothered about Liza.

“Liza, go straight to the kitchen!”

Liza was about to change her wet clothes but suddenly she heard her employer shouting, “Where is the towel for Sally? And bring her some hot milk. Faster! Later on Sally will get sick I tell you!”

When everything was settled, Sally was already in her bed and it was only at that time that Liza took a look at her bloody knees and bruises. She felt like crying and told herself, “You are okay Liza, go ahead and change your clothes then prepare dinner for your employer. You are here to work so be strong.”

Why can’t you give us the same love that you give to your animals? Is it because you are only paying us in exchange for our work and you think that you own us? We are humans too, with feelings and emotions and sometimes we feel tired, we feel happy or we feel sad just like everyone else; thus, we deserve your respect.

One thought on “Treat domestic workers as well as your dog”