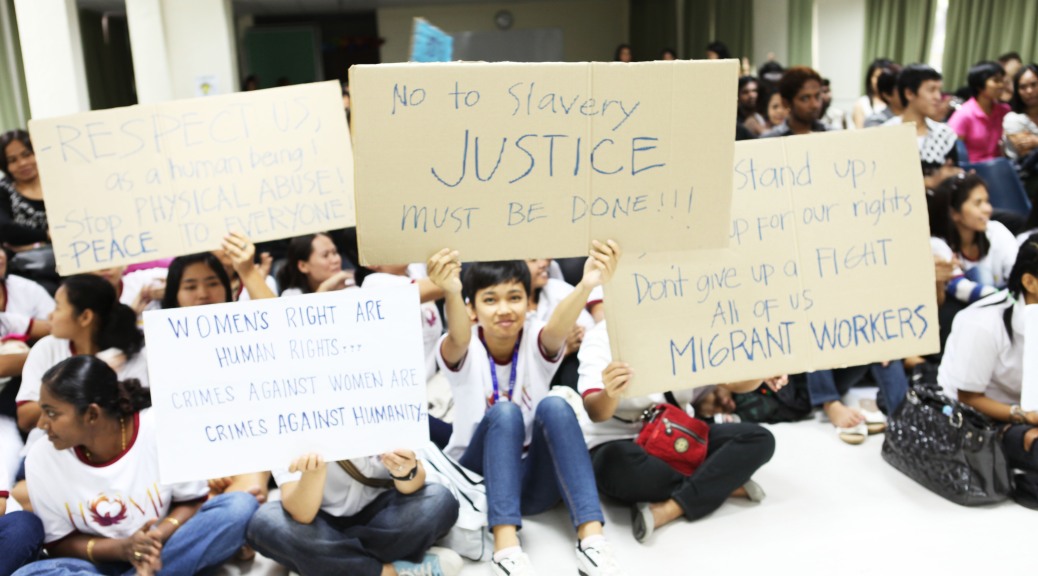 This International Migrants’ Day 2014, we stand in solidarity with workers all over the world in their struggle for dignity and human rights. Migrant workers make important contribution to their countries of origin and destination. However, in Singapore, HOME has been witness to the afflictions of thousands of migrant workers, who continue to be exploited because of their nationality, class and gender.

We have upheld that ‘Domestic Workers are Workers‘ and should receive the same protections as all other workers in Singapore. No domestic worker should be made to work every day of the year without a day off, without limits to their working hours, without overtime pay, and other standard employment rights.

It is a shame that Christmas Day and other holidays is the right of all workers except domestic workers. In spite of efforts to improve their wellbeing, many of them continue to be abused, marginalized and discriminated against. Even though a law has been passed to ensure weekly days off for domestic workers, HOME’s experience has shown that significant numbers are still denied this basic labour right and attempts by domestic workers to claim it has resulted in instant dismissal and repatriation by their employers. The lucky ones who are granted days off are still required to perform household chores, or have to return to their employer’s homes only after a few hours of freedom.

The continued exclusion of these women from the Work Injury Compensation Act and Occupational Safety and Health Act means that the household is still a potential minefield for domestic workers. This year, HOME assisted two domestic workers who suffered debilitating injuries from falling out of a window. They were immediately dismissed and repatriated when the doctor certified them fit for travel. It was only with the persistence of HOME and our partners that we were able to secure compensation for one of the injured women. The fate of the other injured worker is still uncertain.

Construction work remains a dangerous occupation for migrants, in spite of many years of work site safety campaigns. In the first 3 months of this year alone, 19 workers died because of a work accident. Workers in all sectors continue to be vulnerable to heavy recruitment debts, excessive hours, earning wages as low as $1.50 per hour and living in decrepit quarters. When protests against such conditions occur, repatriation thugs are brought in to get rid of such “recalcitrant troublemakers”. There is usually little recourse for workers in such situations.

If they are HIV positive, they are immediately deported without post counseling or referral treatment services. The work permit and security bond system encourages slavery like conditions and human trafficking: passports are taken from workers and job mobility is mostly not an option.

The voices of migrant workers are muted even before they get hoarse. They are not allowed to register associations or form their own unions. Any industrial action will result in immediate deportation and revocation of their work permits. The Controller of Immigration and Work Passes have sole and arbitrary powers to decide the fate of a migrant worker residing in Singapore, with no statutory avenues of appeal. This is deeply unjust.

The SMRT strike in 2012, the Little India riot last year and the fire at a Geylang shop house this year which killed 4 have clearly shown there are many challenges before migrant workers can fully realise their rights. The road to dignity will be an arduous one, but HOME pledges not to lose hope and to persevere in the long march to freedom from slavery.  Happy International Migrants’ Day!