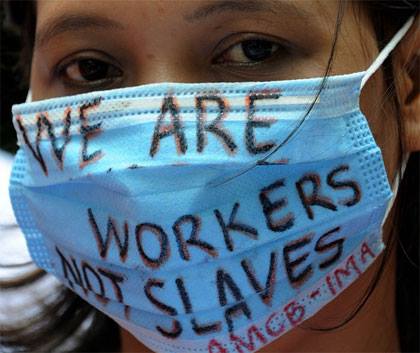 As Singapore commemorates Labour Day this year, we call on our   national government, the labour movement and all employers to improve the lives of migrant workers in this country.  Many of our migrant workers suffer gross human rights and labour rights violations on a regular basis. The labour movement in particular, should take an active interest in the rights of domestic workers by advocating with them for better working and living conditions.

The government should also take the progressive step  to include domestic workers in the Employment Act, thereby ensuring that all the rights which are granted to every other employee  (such as limits to working hours, rest periods, annual leave, sick leave, maternity leave, public holidays and over-time pay) are not denied to them. It is deeply disturbing  that such an advanced country as Singapore, which boasts the highest GDP per capita in the world, continues to pay our more than 200,000 migrant domestic workers approximately $1 an hour for a 16-18 hour work day, and other migrant workers as little as $1.50 per hour.

We call attention to the plight of Rinonos Analyn Almoite a Filipino domestic worker whose ex employer Ms Wong Pui Kwan was recently convicted of severely abusing her. Analyn was subjected to severe physical, psychological and sexual abuse. As she was traumatized by her experience, she was not able to seek employment as a domestic worker and stayed at HOME’s shelter for the entire length of investigations and proceedings. After more than a year at the HOME shelter, she was suffering from severe depression and anxiety. Analyn informed the authorities that she wanted to return home and requested the release of her passport, which had been impounded by the police. This was denied because they required her to remain behind to continue assisting in investigations, caused her extreme angst.

The accused finally pleaded guilty to a number of the charges and Analyn was informed that she was no longer required to stay in Singapore. Two years and three months after she ran away from her employer, Analyn finally returned to the Philippines in February 2014. She was finally reunited with her loved ones.  Her employment and subsequent court hearings resulted in her taking no money home to her family after  two and a half years in Singapore. The only motivation for her departure from Philippines was to work here to provide for her family.  Instead, she returned home in an extremely vulnerable and depressed state that, in HOME’s opinion, was exacerbated by being forced to remain in Singapore, against her will, for such a long time. We not only urge the government to mandate improved working conditions for migrant workers but also consider an effective victim protection scheme for all migrants acting as prosecution witnesses.  In this way they are entitled to a decent work environment, effective social and psychological support and ultimately adequate compensation for their suffering and losses should employers act abusively.

Despite pronouncements and some efforts to improve the welfare and working conditions of migrants, many low wage migrant workers continue to suffer systemic discrimination in this country. In all sectors of the economy, wage discrimination by nationality is a widespread problem, and there are no effective policies and laws to address it.  Migrant workers are frequently wrongfully dismissed without right to recourse, and faced with unjust financial burdens due to debt to recruiters. They have minimal rights with respect to the non- payment of their salaries and are almost always denied job mobility.  HOME has seen multiple circumstances where migrant workers have their passports confiscated from them and they are not allowed to switch employers even though they suffer grave abuses from those employers. The government’s policy of forfeiting $5000 from all employers of work permit holders has led to situations where domestic workers are forcibly confined in their homes and other migrant workers forcefully repatriated by security companies. These policies leave thousands of them vulnerable to forced labour and human trafficking.

Among the issues that require urgent attention is the inclusion of domestic workers in the Employment Act, bilateral agreements with countries of origin, a more just recruitment and employment system for migrant workers, and the inclusion of migrants in social security and reintegration programmes.

The current crisis in immigration can only be resolved when labour rights and protections are given to all workers. It is in our unity and solidarity that the first step towards genuine change will come. We need to recognise that all workers, regardless of nationality, age, race, or gender face the same struggle— a struggle against an economic and social system that has brought misery to many and privileges to a few. In solidarity, with workers of the world may we in Singapore be resolved to end all contemporary forms of slavery for all workers including migrant workers in the labour force.